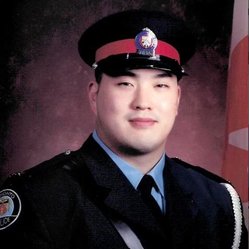 On September 12, 2022, Constable Hong was on a break from training when he was shot and killed in an ambush attack. His murder was the first in a series of shootings that followed which left two community members dead.

Constable Hong had been a member of the Toronto Police Service since 2000, starting in 42 Division and was later assigned to Traffic Services – where he served as a motorcycle officer since 2008.

The 48-year-old officer is survived by his wife, two children, parents and two sisters.