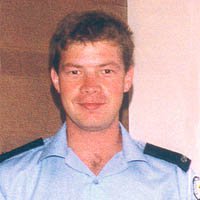 On August 4, 1998, Detective Constable William Hancox was working undercover with a team of officers when he notified his team that he was getting something to eat. A short time later, a broadcast was received from Detective Constable Hancox advising that he had been stabbed and needed help. Officers attended the location and found him lying near his police vehicle. Emergency first aid was applied and he was transported to hospital. Detective Constable Hancox succumbed to his injuries later that evening. Two women were later arrested and charged.