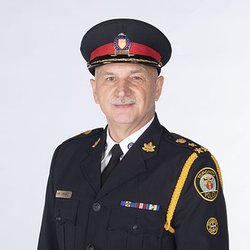 James Ramer is the Chief of Police of the Toronto Police Service, the largest municipal police service in Canada. He is leading the future of policing through the Service’s commitment to do better where it matters most to Torontonians.

As Chief, he is steering the continued support of Vision Zero to make our roads safer, preventing hate crimes and increasing investigative capacity, growing the Neighbourhood Community Officer program and supporting community policing in our most vulnerable communities, and strengthening relationships with communities through comprehensive police reform and the recommendations from the Missing and Missed Review.

He joined the Toronto Police Service in 1980 and prior to his current role, he held the position of Deputy Chief of Specialized Operations Command (SOC); overseeing 1,200 police officers, 160 civilian members, and managing a budget of $240M. SOC is comprised of the Service’s various investigative squads within Detective Operations and a variety of specialized uniform units within Public Safety Operations.

As Staff Superintendent of Detective Operations, he was responsible for specialized units, including Homicide, Hold Up, Sex Crimes, and Financial Crimes. He was also the Unit Commander at 22 Division, the Community Mobilization Unit, Professional Standards, the Emergency Task Force and Intelligence Services.

As an active leader in the policing community, he holds memberships with the International Chiefs of Police (IACP), the Canadian Association of Chiefs of Police (CACP) and the Ontario Association of Chiefs of Police (OACP). He sits on sub-committees for the CACP and OACP that pertain to counter terrorism, national security issues, and organized crime. Chief Ramer is also a member of the Executive Body for the Criminal Intelligence Service of Ontario and the National Executive Committee (NEC), as well as a Board Member with the Leadership in Counter Terrorism (LinCT) Executive and Covenant House.

In 2010, he was awarded the 30 Year Police Exemplary Service Medal. He has since received the Queen’s Diamond Jubilee Medal (2012) and was appointed Member of the Order of Merit (M.O.M.) of the Police Forces (2019).

Chief Ramer holds a Bachelor of Arts Degree, together with post-graduate studies in Industrial Relations and Ontario History from the University of Toronto. He has completed the Leadership in Counter Terrorism Program (LinCT), Senior Police Management (Boston College), and National Securities Studies (Canadian Forces Staff College). He has also completed the National Incident Commanders Course (NICWGA), the Senior Police Administration course, and is a certified Incident Commander.