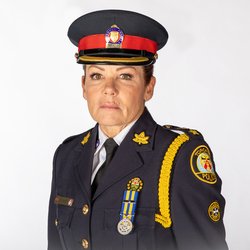 Acting Deputy Chief Pauline Gray has been a member of the Toronto Police Service since 1988.

Her policing career has been predominantly spent within the field of criminal investigation including the Gambling Squad, the Major Drug Squad and Domestic Violence Response.  After having spent over 11 years with the Toronto Homicide Squad both as a Lead Investigator and Major Case Manager, Acting Deputy Gray then spent the next years working as an Inspector in Divisional Policing, and Unit Commander in both Sex Crimes and Professional Standards.

As a Superintendent, she was the Unit commander of Specialized Criminal Investigations which encompasses Homicide, Sex Crimes, Hold Up and Forensic Identification Services. As a Staff Superintendent she lead Detective Operations having responsibility of Intelligence, Specialized Criminal Investigations and Organized Crime Enforcement which encompasses Guns and Gangs, Drugs, the Fugitive Squad and Financial Crimes among others.

Currently as the Acting Deputy Gray has carriage of Specialized Operations Command. She is also the Implementation lead of Missing and Missed the Report of the Independent Civilian Review into Missing Person Investigations.