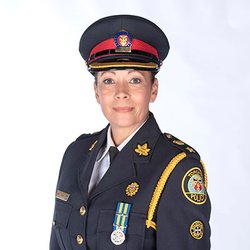 Lauren Pogue is a 34-year veteran of the Toronto Police Service and presently the Acting Deputy Chief of Community Safety Command.

In her current role, she oversees 12 districts consisting of 16 Divisions, as well as Field Services which includes the Toronto Police Operations Centre, Communications Services, Traffic Services, Parking Enforcement, the Public Safety Response Team and the Community Partnerships & Engagement Unit. The Command pillar provides proactive and reactive public safety services in partnership with key stakeholders and the many diverse communities in Toronto.

In her role as Staff Superintendent, she was responsible for Detective Operations which encompasses Intelligence Services, Organized Crime Enforcement and Specialized Criminal Investigations. These units include the Service’s high-profile investigative units, including the Homicide and Missing Persons Unit, the Integrated Guns and Gangs Task Force, the Hold-Up Squad and Forensic Identification Services.

Throughout her career, A/Deputy Chief Pogue has also served as the Unit Commander of Central District in Midtown Toronto, Unit Commander of the Hold-Up Squad and second-in-charge of Intelligence Services.  In addition, she has fulfilled a number of supervisory roles and worked as an investigator in various units throughout the organization including Intelligence Services, the Drug Squad, the Fugitive Squad and the Firearms Enforcement Unit.

A/Deputy Chief Pogue led security teams during the Pan Am Games and was the Ceremonies Chair for the Special Olympics Ontario Invitational Youth Games.  She served as an Incident Commander during many large demonstrations and other events, including the Raptor’s NBA playoff games and the Championship Parade.   She is the executive sponsor to the Aboriginal Internal Support Network and also the Co-Chair of the Chief’s Aboriginal Consultative Committee, working closely with the Indigenous community to continue building meaningful partnerships.

A/Deputy Chief Pogue earned her Bachelor of Arts degree in English from York University and is a graduate of the Canadian Forces College Canadian Security Studies Programme.