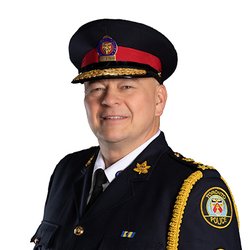 Chief Myron Demkiw, a Member of the Order of Merit of the Police Forces (M.O.M.), is a 30-year veteran of the Toronto Police Service.

In his most recent role as Deputy Chief, Specialized Operations Command, he oversaw 1,200 police officers, 900 civilian Members, and a budget of $240M. The Command is comprised of the Service’s various investigative squads, a variety of specialized uniform units and Court Services.

Prior to this assignment, as a Staff Superintendent, he was responsible for two different pillars of the organization. He oversaw Corporate Risk Management, which includes Professional Standards, Professional Standards Support and the Toronto Police College; and, prior to this, he was in charge of Detective Services, which includes the Service’s high-profile investigative units, such as the Homicide Squad, Integrated Guns and Gangs Task Force, and the Hold-Up Squad.

Over the course of his career, Chief Demkiw has served as the Unit Commander of Intelligence Services and the Officer in Charge of Strategy Management Corporate Projects, the Second in Command of 32 Division, Duty Senior Officer, and fulfilled several supervisory roles in various units throughout the organization.

He has also participated in several Service-wide initiatives. As an integral member of the Police and Community Engagement Review (PACER) Team, since its inception in 2012, he provided senior leadership for the implementation of recommendations, championing the Service’s Fair and Impartial Policing© program, the Service’s Intercultural Development Program, and active participation in the PACER Advisory Committee.

Chief Demkiw’s extensive community engagement helped inform his work as a key architect of the Service’s renewed and comprehensive approach to preventing and dealing with gun and gang violence, an issue of key concern for Toronto residents.  Under Chief Demkiw and the Command’s leadership, a progressive, intelligence-led, and precise strategy was developed to strategically target criminal elements while respecting and protecting the communities in which they may be operating.

As a member of the Service’s Command team, along with dedicated officers and civilians across the Service, Chief Demkiw has been instrumental in helping to lead the Service’s significant efforts in police modernization and reform. This includes his role in championing the Service’s implementation of the Board’s 81 police reform directions. Chief Demkiw is dedicated to this bold and progressive agenda, approved by the Board in August 2020, which puts into place a roadmap for comprehensive policing reform, and includes building new community safety response models, initiatives to address systemic racism, and concrete steps to strengthening trust with our communities.  He demonstrates a deep and sincere understanding that, to truly serve and protect the public, policing must be done in meaningful collaboration with members of all of our communities.

In addition, Chief Demkiw helped to launch the Service’s response to the Independent Civilian Review into Missing Persons Investigations, led by the Honourable Gloria Epstein, Q.C., over a three-year period, setting the course for the Service’s role, cooperation, and commitment to this ground-breaking work. The 151 recommendations contained in the Missing and Missed: Report of the Independent Civilian Review into Missing Person Investigations are aimed at improving the police handling of missing person investigations. This is a transformative and significant report, and Chief Demkiw is committed to completing this work.

In 2019, Chief Demkiw joined the Black Internal Support Network (BISN) as a Senior Advisor. He assists the group’s Executive Committee by providing guidance and support on issues that are raised by the BISN relating to anti-Black racism and the lived experiences of Black Service Members. He also supports many of the BISN’s initiatives.

Further, Chief Demkiw is the Service’s champion on SafeTO, a bold and unique approach to advancing community safety by working collaboratively across sectors, communities, and governments.  He has made significant contributions in the development of a Community Safety and Well-Being Plan that is premised on the goals of social development, prevention, risk intervention, and incident response, reimagining and unifying our collective approach to community safety.

In addition to his community-building work, Chief Demkiw is a well-respected policing leader in Canada for his ongoing commitment to counter-terrorism and national security. He is engaged both nationally and internationally on these issues, which are of critical importance when overseeing a police service in a city of our size and international stature, with its significant reputation, and notable role in the country’s commerce and tourism industries.

A graduate of the University of Toronto, Chief Demkiw attended the Faculty of Law and completed the Global Professional Master of Laws program, and   also earned his Bachelor of Arts degree, majoring in both Criminology and Political Science. He is a graduate of the Rotman School of Management’s Police Leadership Program. His commitment to life-long learning, with a focus on law, has served him well as a member of the CACP’s Law Amendments Committee.

Chief Demkiw has been a long-time charitable contributor, raising money for various charities, with his hands-on participation including shaving his head for Cops for Cancer, and even jumping into ice-cold water for the Polar Bear Plunge.

On a personal note, Chief Demkiw is a married father of two and is a proud member of Toronto’s Ukrainian community. As a lifetime resident of Toronto, and having raised a family in the city, he continues to be invested and attuned to the issues affecting quality of life for those of us who live and/or work in the City of Toronto.